A great photo essay by The Straits Times. 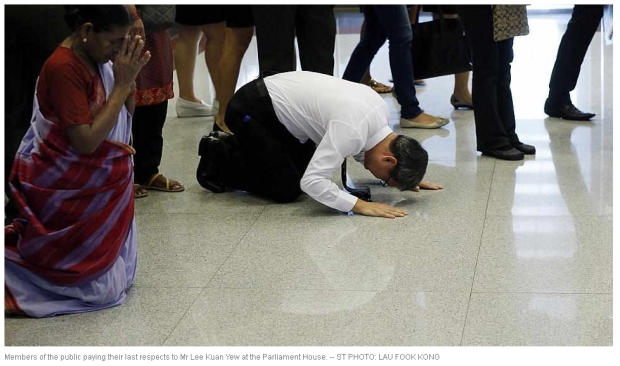 Writing on his blog [Link], the former director of Singapore’s Internal Security Department (ISD), Mr Yoong Siew Wah, has called upon PM Lee to relax the “inordinate persecution” of Francis Seow and Tang Liang Hong by allowing them a safe return to Singapore to lead a normal life.

His call came after the demise of PM Lee’s father, Lee Kuan Yew, who was the first PM of Singapore.

Mr Yoong wrote on his blog asking PM Lee, “Would you be humane enough to redeem a little bit of your late father’s handiwork by relaxing the inordinate persecution of Francis Seow and Tang Liang Hong by allowing them safe return to Singapore to lead a normal life?”

“By no stretch of imagination can they be described as major security threat,” Mr Yoong added. “There is a Chinese saying that if you want to impose a criminal charge on a person there is no dearth of a reason (欲加之罪，何患無詞）.”

Mr Yoong also noted that magnanimity was not one of Lee Kuan Yew’s traits in his lifetime.

He said of the late Mr Lee, “Is there any character flaw in the late Lee Kuan Yew? Some of his unfortunate political opponents are no longer alive to answer that. Some of them suffered immensely, whether real or imaginary depending on which side you are on, at the hand of the humanitarian Lee Kuan Yew but strangely bore no ill-will against him.”

“The late Dr. Lim Hock Siew’s son was five months old when he was unceremoniously detained under Operation Coldstore on 2 February, 1963 and entered university when his father was humanely released after 19 years in detention. Chia Thye Poh held the honour of 32 years in detention, even longer than the famous South African leader Nelson Mandela,” he added.

Francis Seow was the former Solicitor-General of Singapore and served under then PM Lee Kuan Yew. He eventually left public service and entered into private law practice in 1972.

He later became the President of Law Society in 1986. His appointment led to a falling out with Lee Kuan Yew after he became embroiled in the politics surrounding the role of the Law Society at that time. He had envisaged a restoration of the role of the Law Society to comment on legislation that the government was then churning out without any meaningful parliamentary debate, a role which Lee Kuan Yew took special exception to.

As a result, the entire council of the Law Society and its legislation sub-committee were summoned to appear before a parliamentary select committee and interrogated by then PM Lee Kuan Yew. Under long and intimidating questioning by Mr Lee, which was telecast on TV, Mr Seow and his colleagues stood their ground. In the end, it was Mr Lee and his committee members that came out looking bad. Regardless, the Legal Profession Amendment Bill was subsequently passed by Parliament and, the right and duty of the Law Society to comment on legislation was removed.

Some months later in 1987, some of the members of Law Society together with opposition politicians, church workers and others were arrested and detained without trial under the ISA. They were arrested for purportedly involving in a conspiracy to “overthrow” the Govt by force and replace it with a Marxist state. Francis Seow became the lawyer for several of those detained.

On 6 May 1988, Mr Seow who was representing some of the detainees was himself arrested under the ISA while waiting inside the ISD headquarters to meet his clients. The government accused him of “colluding with foreign diplomats and officials to lead a group of opposition lawyers and professionals into Parliament”. He was alleged to have misused his status as a legal counsel as a cover for political propaganda and agitation. Mr Seow was held in detention for 72 days and was later released as a result of pressure by international human rights organisations.

Soon after his release, Mr Seow stood for election as an opposition candidate at Eunos GRC in the 1988 GE in Sep. Mr Seow and his team managed to secure 49.1% of valid votes, losing only marginally to the PAP stronghold.

After election, Mr Seow was charged with tax evasion. He sought political asylum in the United States. In exile, he became a Visiting Fellow at Yale University and then at Harvard University where he wrote several books. Mr Seow was convicted in absentia.

It was later revealed by ESM Goh that former National Development Minister S. Dhanabalan left the Cabinet in 1992 because he was not comfortable with the way the PAP had dealt with the “Marxist Conspiracy” incident. “At that time, given the information, he was not fully comfortable with the action we took… he felt uncomfortable and thought there could be more of such episodes in future. So he thought since he was uncomfortable, he’d better leave the Cabinet. I respected him for his view,” Mr Goh said of Mr Dhanabalan.

Tang Liang Hong was a lawyer and former opposition politician. He stood as an opposition candidate in the Cheng San GRC at the 1997 GE. Mr Tang’s team garnered 45.2% of valid votes and lost to PAP.

During the election campaign, PAP leaders accused Mr Tang of being an anti-Christian and anti-Muslim, Chinese chauvinist. Mr Tang vigorously denied that he was a Chinese chauvinist and accused the PAP of trying to win votes by sowing fear into the electorate.

After the election, Mr Tang was sued for defamation by several of the PAP leaders, who accused him of making statements during the campaign which falsely questioned their integrity. A total of 13 judgements were entered against Mr Tang for defamation. In addition, he also faced tax evasion charges.

Mr Tang fled to Australia soon after the election and has not returned to Singapore since then.

The PAP leaders were able to obtain default judgements against Mr Tang in their suits. Damages of some $8 million were entered against him.

I refer to TRS article “Is the Singaporean taxpayer subsidising Ho Ching’s bonus” by Kenneth Jeyaretnam.

As stakeholders of Temasek Holdings, all citizens have the right to know not only the bonus of its CEO but the annual pay package of all its directors.

PAP is obligated to disclose the amount of reserves used to remunerate Temasek directors. Instead, PAP has privatised public funds and Temasek has no statutory obligation to disclose any information it prefers to conceal.

Last year, Temasek and the PMO refused to reply to my query on Temasek directors’ remuneration. Why? Is the remuneration so highly embarrassing if disclosed? After some research, I estimate Temasek CEO’s pay package to be at least $20 million. This is based on the following: